Andrea Goldsmith, an expert and entrepreneur in wireless systems who has served in campus-wide leadership roles at Stanford University, has been appointed dean of the School of Engineering and Applied Science at Princeton University effective Sept. 1. 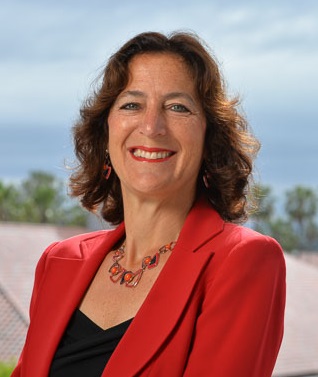 Goldsmith is the Stephen Harris Professor of Engineering and professor of electrical engineering at Stanford. In addition to being widely recognized for fundamental contributions to the field of wireless communications, she has co-founded and served as chief technical officer for Quantenna Communications and Plume WiFi. She is a member of the National Academy of Engineering and the American Academy of Arts and Sciences, two of the highest honors in U.S. academia.

“Andrea Goldsmith brings tremendous expertise and leadership to Princeton,” said President Christopher L. Eisgruber. “She is a brilliant and creative scholar, a successful entrepreneur, and a strong advocate for diversity and inclusion in the academy and industry. I expect that she will be a superb dean for Princeton’s School of Engineering and Applied Science, and I am delighted she has agreed to join us.”

Goldsmith succeeds Emily A. Carter, who became executive vice chancellor and provost at the University of California, Los Angeles, on Sept. 1, 2019. Former dean H. Vincent Poor is serving as interim dean and led the search. Goldsmith also will join the Princeton faculty as the Arthur LeGrand Doty Professor of Electrical Engineering.

“The opportunity to steer creation of new buildings and a new neighborhood for the engineering school, launch interdisciplinary institutes in bioengineering and data science, grow the number of engineering faculty and students significantly, and foster innovation and entrepreneurship within engineering and more broadly throughout Princeton, is unique and extremely compelling,” Goldsmith said. “These initiatives have the potential for lasting impact not only for Princeton, other universities, and the engineering profession, but for people everywhere who will benefit from the new knowledge and innovations that we will create.”

Goldsmith is a leader in the fields of information theory and communications, with a focus on creating innovations in wireless communications, cyberphysical systems and neuroscience. Starting in the 1990s, Goldsmith developed foundational mathematical approaches for increasing the capacity, speed and range of wireless systems, including techniques widely used today in cellphone networks and Wi-Fi. She also started and led several federally funded, multi-university research projects to advance this work.

In addition to her election to the national academies, Goldsmith has received numerous awards and has been appointed to leadership roles in her field, including within the Institute of Electrical and Electronics Engineers (IEEE), the largest professional society in the world. She has served on the Board of Governors for both the IEEE Information Theory Society and the IEEE Communications Society, and as president of the IEEE Information Theory Society. In 2019, the IEEE honored Goldsmith with its Eric E. Sumner Award for her contributions to the theory, practice and commercialization of wireless technology.

In 2005, Goldsmith built on her research to co-found Quantenna Communications, which produces chips for high-speed, reliable Wi-Fi. Quantenna grew into a publicly traded company and was acquired in 2019 by ON Semiconductor Corp. She co-founded in 2011 Plume WiFi, which sells in-home Wi-Fi mesh networks. Goldsmith also serves on the board of directors of the medical device maker Medtronic and the communications infrastructure company Crown Castle.

Goldsmith received her bachelor’s, master’s and doctoral degrees in electrical engineering at the University of California, Berkeley. She worked in industry and taught at the California Institute of Technology before joining the Stanford faculty in 1999. She was named the Stephen Harris Professor in 2012. She is also affiliated with Stanford’s Neurosciences Institute. Goldsmith has served in numerous leadership roles at Stanford and currently is a member of the Faculty Senate, the Board of Trustees Committee on Finance, and the University Budget Group.

Goldsmith also has been an active advocate for increasing diversity in the fields of science, technology, engineering and mathematics (STEM), in academia, and in the hi-tech industry. She founded and currently chairs a Board of Directors committee on enhancing diversity and inclusion in the IEEE; led efforts within the Stanford Leadership Academy and the University Promotions and Appointments Advisory Board to develop best practices that improve recruitment and retention of diverse faculty; and served on the Stanford Faculty Women’s Forum Steering Committee, a group focused on improving recruitment, retention, support and overall satisfaction of women faculty.

“In my university, in my profession and in my startups I have found that diverse participants lead to a broader set of ideas and overall better outcomes,” said Goldsmith. “Efforts to increase diversity must also ensure an inclusive and supportive environment to retain diverse members and maximize their success.”

Goldsmith comes to Princeton at time of major growth and investment in engineering and applied science. The engineering school has launched strategic initiatives to accelerate the impact of its research and teaching in bioengineering, data science, the future of cities, and robotics and cyberphysical systems. The University also is planning for major construction projects, including new buildings for departments and for a bioengineering institute, to support these initiatives and to further increase Princeton’s contributions to New Jersey’s economy and the region’s innovation ecosystem.

“I am honored to be selected for this role, and excited to help execute Princeton’s bold and compelling vision for SEAS,” Goldsmith said. “I’m very much looking forward to working with Princeton faculty, students, staff, leadership and trustees to realize that vision and ensure that together we are achieving maximum benefits for humanity.”

The School of Engineering and Applied Science at Princeton emphasizes the discovery and application of fundamental scientific principles to bring lasting benefits to society. A key to this work is the school’s collaborative culture. Faculty and students work closely with industry and with Princeton’s world-leading programs in the natural and social sciences, humanities and public policy. Graduates go on to become leaders in a wide range of industries, academic fields and public service.